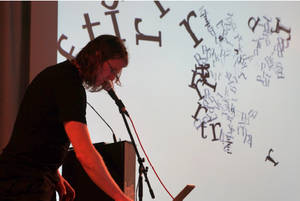 Jörg Piringer Born 1947, lives in Vienna, member of the Institute for Trans-Acoustic Research and of the Vegetable Orchestra, works in the gaps between language art, music, performance, and poetic software.

About the piece "darkvoice"
darkvoice is an electronic audio-visual performance dealing with the role of spoken language under the threat of a permanent and comprehensive surveillance.

The acoustical and optical material of the performance consists exclusively of voice, electronically processed voice, and text. Through methods of algorithmical real-time controlled processing, this material is re-arranged and manipulated live during the performance. The controlling is carried out on the one hand by the performer and also through a wide variety of current (text)data streams from the internet making the aspect of language manipulation and surveillance transparent. The analysis of these data streams is carried out through the same linguistic and statistic methods that are used by the monitoring systems of the intelligence services. The extracted data are then transformed into acoustic and text information which is integrated directly into the performance. The catch phrase of big data is therefore translated into an artistic strategy of annexation in darkvoice. 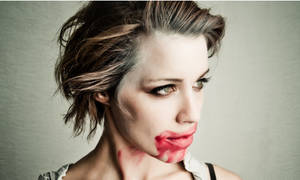 Mimu Merz Mimu Merz is a Vienna based graphic designer, media artist, singer and songwriter. The artist describes her vocals as: „wayward phrasings and introspective lyrics, sometimes mumbled, sometimes pointed out clearly, like a salty finger in the wound of ongoing life. Puns and structures. Patterns and norms. Lofty love and wicked war.“ (quote from elevate.at)

Various projects:
„mimu at nite“ – »experimental folk« (www.myspace.com/listentomimu), a solo performance with voice, accordeon and laptop. The accordeon is played minimalistically, either rhythmically or droning – according to the particular song, the voice is layered over that solid ground in a very flexible way. The vocals are very narrative, the stories are clothed in metaphoric constructions of a flowery language.

The laptop provides distinct atmospherical components such as field recordings of varying places (like woods, cities) or incidents (fighting dogs, car accidents), or samples of old movies that correlate with the context.

Other baubles of mimu can be found on Soundcloud. The site contains produced sound material (the other one contains mostly live recordings of concerts), that leads more towards the direction of „electronica“, several voices, live-looping, spoken word collages and pictorial samples of integrated works of art.
As a visualist (from 2001 to 2008) she accompanied acts such as DMX, Ellen Allien, Modeselektor, Gustav, Felix Kubin, Iambic Squared, Jake Fairley, Squarepusher and many more.

Miriam Mone aka Mimu or Mimu Merz doesn’t do things by halves – regardless if she is practicing the fine arts, endulging in word-play on facebook, or making music: she always gives at least one hundred percent. Having collaborated with colleagues like Ritornell or Clara Moto, the Vienna based artist who was born in Styria now presents her debut album “Elegies in Thoughtful Neon” on which she has been working for years and rumours of the record’s outstanding quality have already been circulating for a while. As a matter of fact, this album that challenges and equally rewards the listener, is the most intense Austrian record of 2013.. (musicaustria/ mica)